Mega Group’s veteran design director believes when she and her team create a new interior store design, the focus needs to be on the product displayed with the goal of helping grow the retailer’s sales and profits. It also helps define what she calls “the myth of the store.” 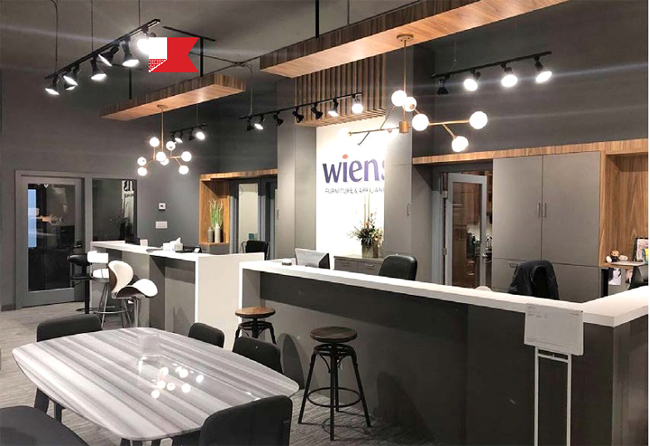 The sales area in Wiens Furniture & Appliances features a counter height work surface that serves as a place to congregate and invites the consumer to easily interact with the sales associates. The suspended drop ceiling and lighting amplify the warm atmosphere although surrounded with dark colours. The light coloured background for the sign accentuates the store branding.

Strip away the frivolities and misconceptions, interior design has one goal in a retail environment. To
help the store owner sell more product at a better margin. That’s how Carole Vallières defines her primary responsibility as commercial design director for Mega Group, a position she’s held since 2001.

“My role is to make the product stand out,” she said in an interview held during the Reconnect convention this past October, the first in-person event it has held since the declaration of the COVID-19 pandemic. “It’s about making sure that the product is well presented.”

Vallières is also quick to point out there are real and distinct differences between interior design, interior decorating and merchandising.

Interior design is about the cube – the space the store inhabits. “I take care of that space and make sure the traffic flow will be easy throughout the entire space,” she says, “making sure all of what you want to show in your store is accessible visually. I create the maze for the consumer to go through. The interior decorating will then dress that space.”

The interior design will make sure the retailer uses his available space to its fullest potential while the decorator selects the colour palette those entering the space – be they employees or customers – will see. 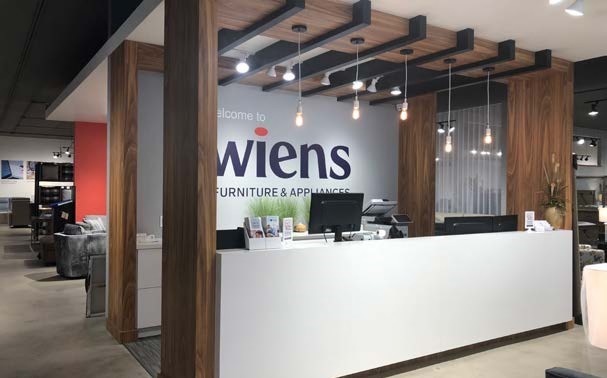 Seen here is the reception desk at Wiens Furniture & Appliances, a BrandSource authorized retailer in Niverville, Manitoba. Located close to the entrance, it’s an attractive point of interest for the consumer after walking into the store. The wood arch and beams frame the sign while the minimalistic counter emphasizes the branding shown at the back.

“The merchandising will then decide the selling strategy,” Vallières continues, adding the designer creates a grid “and the merchandisers indicate what SKUs (stock keeping units) are going to be placed within the grid.” Working out of Mega Group’s office in Montreal suburb of Boucherville, Vallières and her team handle an average of 20 projects a year, which vary from updating a department to a complete store renovation. From what can be determined, the member-owned Mega is the only buying group – and, indeed, one of few retail organizations – in North America with an in-house interior design department.

She also firmly believes there’s a direct connection between a well-designed store and sales – in fact, the retailer’s top line is the first subject to be discussed and analyzed when she and her team take on a new project.

“When we start a project, my first question is how much do you sell? I need to know how much you sell per category, because that will indicate where your weaknesses and strengths are. Sales are extremely important,” Vallières observes, adding if the retailer’s average ticket at the beginning of a project is $600 – for example – after the project is finished, it often goes as high as $800.

She believes a well-designed store builds customer loyalty and points out there’s a reason why shopping centre leases usually contain a clause demanding the retailer renovates the space every five years. “That’s because they know if the retailer doesn’t renovate, traffic flow will go down and consumers will be less interested in the store,” she says. “The retailer always needs to be on top of these trends in order to remain valid to the market.” In her experience, sales climb anywhere from 15% to 25% in the first year after the re-design is finished. “Normally, margins will also go up, because when selling a sofa at $900 (before the redesign project), you’re now selling one at $1,200 and the sofa at $1,200 normally has a better margin,” she notes.

Vallières observes most retailers she encounters don’t have a good understanding of what interior design really is – especially in a retail environment. “I’d like to say they understand, but they don’t,” she says, they often think all she does is choose pretty colours. While she does, indeed, choose pretty colours, there’s more to the process, which is geared at one goal: improving sales.

A well-designed store has immediate and distinct attributes. “When you come into the store, you’re being wowed,” she says. This wow factor often comes from two factors: lighting and circulation.

“Lighting is one of the most important things in retail,” Vallières maintains, adding she discourages the use of fluorescent lighting because it doesn’t shine on the product and usually recommends good track lighting. Circulation, that is how the customer moves through the store, should also be product focused – a series of vignettes, which she describes as “an ensemble of what needs to be presented…and every time the customer turns around, she sees another one. The customer is attracted from one point to another without even knowing that she’s doing so.”

The interior design, she says creates “the true myth of the store.”

The new Barber & Haskill store in Midland, Ontario, combines the appliance and mattress departments. The border between them is a large hallway used to display promotion pieces as well as the customer lounge and children’s play area. The hallway leads to the main desk crown (seen in the background of the photo seen here). The retailer’s name and brand colour are perfectly consistent from the website to the storefront as well as in-store.

One of the Mega members for whom Carole Vallières has undertaken more than one project is Dylan Wiens, the owner of Wiens Furniture, a single unit ‘BrandSource Canada Authorized’ store located in Niverville, Manitoba.

“Carole’s been just amazing for us,” he enthuses. “In 2017, she did a 5,000 square foot appliance renovation for us and helped me design something different.”

The store was in the throes of introducing luxury and premium appliances to its assortment. “My vision was to have workable kitchens in the store. I really wanted the steam over to be working; the induction cooktops to be working and to show integrated appliances in such a way as to ‘wow’ the customer. She helped me realize that vision.”

Wiens freely admits he hadn’t previously taken on this kind of project. “I had never designed 5,000 square feet of showroom before, and in talking with her, going through the floor plan and product layouts, she just made it happen. I was blown away by her ability to realize my dream (for the store).”

After completing the appliance department project, Wiens worked again with Vallières to create a new mattress gallery before recreating the entire store.

“We’re close to a major centre (Niverville is just south of Winnipeg) and when people walk in, they’re very impressed and say ‘there’s nothing like this in the city. We’re like ‘yeah, we know…that’s how we get you here. And so, it has (the redesign) been the ultimate marketing tool.”

He also notes, the pandemic-induced uptick aside, the redesign has been a significant factor in the store’s growth in sales over the past couple of years.

Carole Vallières cautions there is a process to creating a new interior design – one she follows without fail. “It’s extremely important for me when meeting the owner to go through the store and understand how he sees his store.

“I want him to talk about his weaknesses and when I sit with him, I ask ‘what’s the difference between you and the store down the street – your competition? What makes you different? What do you think you’re good at?” The answer to that last question is often: service. However, Vallières notes their definition of service is rarely the same. What she’s looking for in that initial conversation is a sense of the owner’s personality – something that needs to be reflected in the store’s design. After all, she points out, the store design isn’t always nice or beautiful. “A dollar store has a design, and that design is meant to say, ‘I have cheap products of every kind’. When the customer comes in, the colours are geared to that, the traffic flow is geared for that – it’s the same idea.” Vallières says. “A designer did that store as well as I could have done another store in furniture.” 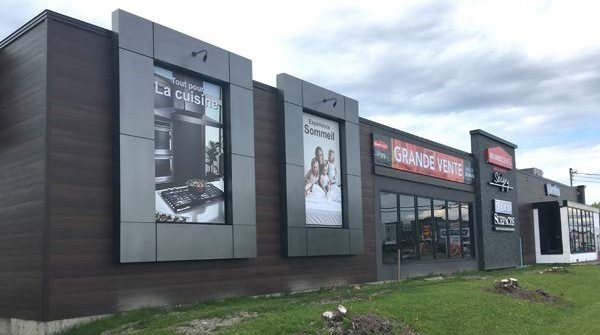 Located in Thetford Mines, Quebec, Ameublement BrandSource Sévigny took over an old bowling center and the Mega Group design team transformed it into an attractive centre for home décor by doing a complete facelift to the storefront.

She also notes for a store with 15,000 square feet of selling space, a complete renovation project typically takes five months with costs ranging anywhere from $22 to $30 per square foot. “The design process usually takes about two months,” she says.

Vallières recommends owners look at redesigning their store’s interior every ten years or so. “Having said that, I always encourage retailers to update colours, materials, wallpaper and greeneries – anything that captures interest – more often. After all, new is exciting,” she enthuses. “The whole idea is to gain more traffic.”

Michael J. Knell is the publisher and editor of Home Goods Online and all three of its platforms. This story first appeared in the Autumn 2022 edition of the HGO Merchandiser.  All Mega Group members are entitled to receive HGO This Week newsletter. Click here to subscribe.